SRNA is working hard since 2012 to bring major traffic improvements to Four Points and Steiner Ranch – SUPPORT US –  donate now.

Traffic conditions/forecast: RM 620 corridor in West Austin is one of the most congested roadways in the metropolitan area; this has been exacerbated by the topographically constrained nature of the corridor and significant growth in residential and business development. Significant growth in the NW and SW areas of Austin add to the traffic congestion because of RM620’s status as the only major north-south connector in West Austin. The RM-620 / FM-2222 intersection has become a particular bottleneck due to its similar status as the only major east-west corridor tying together RM 620 with the city center.

TXDOT projects that the “level of service” along major stretches of RM 620 and the adjoining FM 2222, already in a “failing” state, will continue to worsen in coming years with the consequence of wasted hours and reduced mobility.

The CAMPO 2040 Plan Study highlighted RM 620 as the number one most cited roadway of concern in the Austin Metro Area based on the Public Input process including both mobile meetings and based on over 1500 survey responses (see
CAMPO 2040 Regional Transportation Plan, Adopted May 11, 2015).

From the CAMPO 2040 Plan, Table 6: Priority Projects Identified By Respondents to Survey:

The CAMPO 2020 TIP Plan, put together in 2016, also highlighted RM 620 as the most cited roadway based on public input, with 78% of all comments pertaining to this roadway; a total of 126 of out of 162 written comments from open houses and public submissions specified the need to improve RM620 and RM2222 (see Community Outreach Report, 2017-2020, Transportation Improvement Program (TIP), Spring 2016 )

From the CAMPO 2020 TIP public comment summary: “The second round also included informational comments for the Transportation Policy Board’s consideration, with a large majority of the comments requesting improvements at the RM 2222/620 intersection.”

RM620 / RM 2222 intersection improvements planned for 2019/2020:
TXDOT has proposed a solution to address near term conditions near RM 620 and FM 2222 – the project includes expanding FM 2222 through the critical section near RM 620 through McNeil Road, widening the River Place Blvd / FM 2222 intersection to allow concurrent left turns,  and also includes bifurcating the RM-620 / FM-2222 intersection by creating a new bypass road between south RM 620 and easterly RM 2222. The combination of these improvements is expected to provide significant relief to the RM 620 corridor and is the most critical project along the corridor.  The project is currently in the environmental phase of study and may be ready for construction by 2019.

As of October 2017,  project is officially funded thanks to a combination of State of Texas dollars and the $7.5 million from the voter approved Mobility bond in November 2016 from the City of Austin.

Corridor study results and next steps:
While these improvements are expected to provide significant relief and improved mobility when they are completed in 2020, unfortunately they will still leave RM 620 in “failing state” based on TXDOT’s level of service indication. The RM620/2222 and RM 620/Anderson Mill intersections as well as significant parts of Lakeway/Bee-Caves will continue to be at an “F” level of service. Therefore, TXDOT has conducted a comprehensive RM 620  corridor study to identify other solutions for RM 620 to address the dire congestion forecast along these segments of the corridor. This study has proposed a two part solution. A so-called “mid-term” solution which includes expanding RM 620 by one lane in each direction to a 6 lane divided highway plus raised median for safety. And a socalled “long-term” solution to include elevated express lanes for the norther section from RM 2222 to US 183.  Each of these two solutions would provide necessary and complementary relief for the corridor. TXDOT indicates that the mid and long-term solutions could actually be implemented on a similar time scale. Without additional changes, corridor conditions will continue to deteriorate. Study results are here: http://ftp.dot.state.tx.us/pub/txdot/get-involved/aus/rm-620/corridor-study.pdf ; and here for some pictures of what some of this would like, e.g. like fly-overs at 2222 and 620, here: http://ftp.dot.state.tx.us/pub/txdot/get-involved/aus/rm-620/configuration-option.pdf

The RM620 corridor plan was advanced based on recommendation from a cross-pollinated group including SRNA, West Austin Chamber, Lake Travis Chamber, Rep. Workman, Commissioner Daugherty, Lakeway, Bee Caves, et al. back in 2014. The actual study period was between 2015 and 2016. SRNA pulled together about 10 neighborhoods from RM620 north of the dam to generate a set of recommendations which were provided to TXDOT during the study; in addition TXDOT visited many neighborhoods including Steiner Ranch a number of times during the study period to get input from SRNA and residents.

After the study, TXDOT and CAMPO prioritized the mid-term solution funding to provide some relief on RM620 south of the dam. Lakeway is providing partner funding for those improvements. However, the mid-term solutions needed north of the dam are not funded and therefore do not appear in the current Transportation Improvement Plan. This despite that this section will remain in a failing state even after the 2019-2020 improvements such as the bypass and despite the identification of both the long and mid term solutions being the top identified needs based on public input.

Central government stakeholder support is critical for addressing the next round of needed solutions for the RM-620 corridor. Key stakeholders include:

Unfortunately, none of these stake-holders has yet stepped up to help fund the next round of RM-620 improvements (going to a 6-lane highway with divided median). In contrast, Lakeway and Bee Caves have stepped up with partner funds with TXDOT to fund similar improvements to the south of Mansfield Dam.

Status:
RM 620 / RM 2222 improvements are successfully funded as of 2017! Success
Mid-term and long-term projects will rolled out to the public in early 2017. There is presently no funding and no timeline for the next RM620 improvement projects north of the dam (to US 183). The next step is to secure political support and urgency to fund the project.

This project, which has also been known as the “FM 2222 expansion” or “the 620 bypass” will address the critical congestion which occurs at the intersections of:

The RM 620 / FM 2222 intersection improvement is really a 4 part fix – when put together we will see a significant expected reduction in traffic congestion:

TXDOT estimated hours saved each year from this improvement: 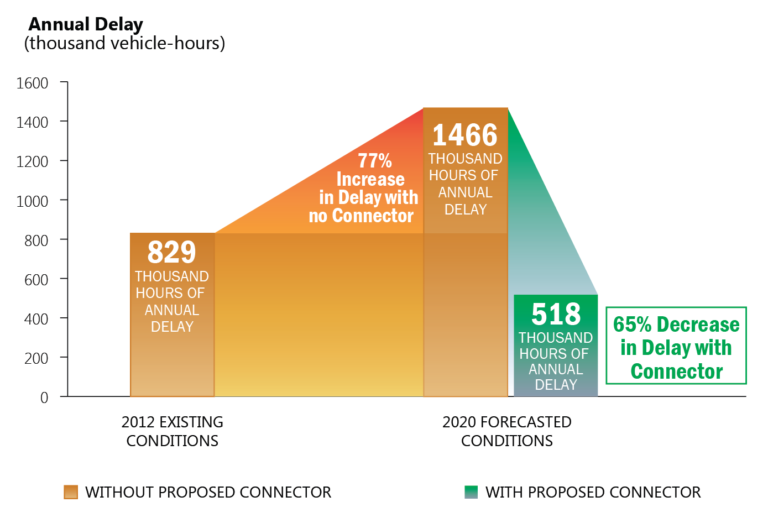 Signal timing is critical to maintain non-freeway traffic flow – the status quo in West Austin. Signaling cannot alone fix congestion when demands exceed capacity – therefore signaling along cannot fix our traffic problems in Four Points – one of the most congested places in Austin. However, traffic signaling can play a major role in mitigating traffic congestion and can have a very positive influence on quality of life by reducing the duration and severity of traffic back-ups when they do occur such as after rush hour.

Standard signaling uses timers and sensors to control the traffic flow using pre-programmed timings. But as soon as traffic gets severely backed up, standard signaling breaks down – because the controllers cannot adapt to the problems and un-even backups that occur.

With recent advances in technology, it is now possible to measure how backed up traffic is. When combined with sufficiently advanced controllers, this means that traffic signals can adapt to current conditions.

Have you ever waited for  5 or even 20 minutes to get to an intersection just to find out that traffic from other directions is NOT backed up? This is exactly what adaptive signaling technology can address. By automatically extending the signal timings for the direction of traffic experiencing the most significant back-ups – unnecessary waiting can be avoided. This can significantly cut down the time in which rush hour is an issue and can eliminate unnecessary backups on weekends and at other times when signaling is sub-optimal.

Perhaps the most important example of the need for adaptive signaling can be seen with the current challenges in rush hour traffic. In the AM traffic flow, the signals at RM620 / RM2222, RM2222 / River Place Blvd., and RM2222 / Sitio del Rio are often ill timed such that they do not enable the green lights to work together and/or do not favor the directions of traffic with the highest back-ups. When the new improvements go in on RM620 / RM2222 there will be even more traffic signals added to this complex system. This will make it even more challenging to coordinate the signals and adapt to various traffic conditions.

The installation of the new improvements will therefore be both an opportune and necessary time to add more advanced signaling controls to deal with all the signals involved. We should invest the money and technology up  front to ensure these improvements will be effective.

In addition to the FM 2222 / RM 620 intersection improvements – other corridor improvements are needed to address significant congestion and safety concerns along RM 620 between Mansfield Dam and US 183. Especially since the RM2222 and Anderson Mill Rd. intersections will still be in a failing state according to TXDOT.

The RM620 corridor study delineates two major changes as part of this improvement:

The proposal for RM 620 from the Dam to US 183 is to add an additional lane in each direction along with creation of a boulevard and removal of the center “suicide lane” for safety.

This proposal will provide important safety benefits by helping to avoid head on collisions and cross traffic accidents- which have been all too frequent along RM 620. It will also provide 50% more throughput capacity for the roadway.

This set of improvements will also include enhancing the RM 620 / Anderson Mill Rd. intersection, such as addition of overpass and underpass. In particular this is likely the first step in addressing the expansion of RM620.
New News (Sept 2018): TXDOT is now committed to bringing this to CAMPO in 2019 for funding. APPROVED May 2019 at CAMPO.

Funding Status: No funding or timeline secured. Improvements north of the dam are not included in the current CAMPO TIP.

Even though additional lanes will help, they are not projected to be enough to address congestion in the coming years. To adequately handle the volume of traffic projected for the corridor will require additional “express” lanes – these provide the benefit of no intersections and allow for the free flow of traffic as well as separate of “through” traffic from “local” traffic.

Leveraging the new boulevard will allow for cantilever style elevated lanes to be created – providing  3-4 lanes of travel. The lanes would continue from SH 45 Toll and would end just after FM 2222 going south. At least one access point somewhere near Anderson Mill (likely to the south) would provide for access for residences and businesses along the corridor.

Note that the elevated lanes would not need to be very tall, but could be designed to account the aesthetics and be sensitive to the neighborhoods along the corridor.

The combination of the two changes: widening RM 620 and adding elevated lanes will provide a true solution for our growing traffic problems.

Funding Status: No funding or timeline secured. Improvements north of the dam are not included in the current CAMPO TIP. However the design alignment is being worked on presently by TXDOT and a public official group has been formed to support the efforts.  An interim step of funding an overpass at Anderson Mill and RM-620 was approved in May 2019 at CAMPO. 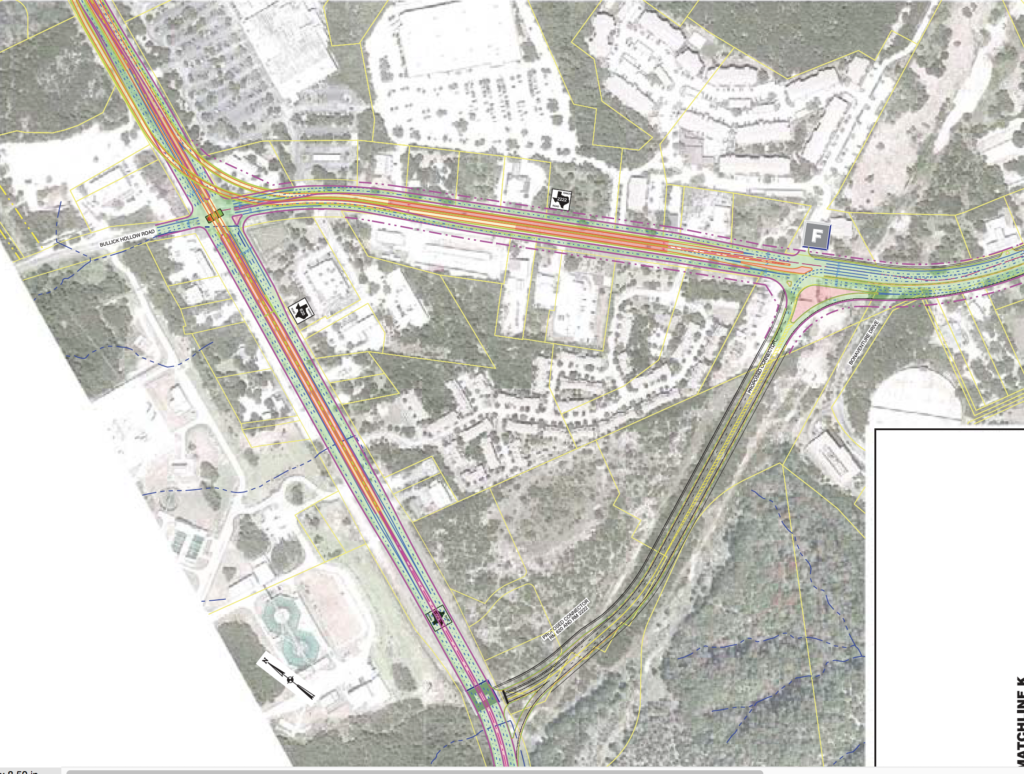