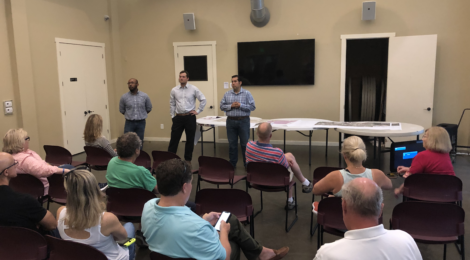 SRNA invited TxDOT for a meeting on June 25 to get an update and deep-dive on the on-going 620/2222 project (answer your design questions, access to Vandegrift, etc).

TxDOT has tight constraints on contractor:
* Main contractor: Capital Excavation has good track-record with TxDOT.
* Lane closures limited to nights 8pm to 5am other than extraordinary exceptions. Coordinated with Sheriff.
* Rewards and penalties to stay on schedule and not get behind.

Project 2 includes the bypass connector from 2222 to 620:
* $10.2M road, $2.4M utility, ROW costs separate (not specified).
* Goes to bid in summer 2019 and start construction in fall 2019.
* Estimated completion March 2020; Possibly open at that time prior to Project 1 completion to help mitigate interference and traffic disruption during the remainder of Project 1.

2. Signaling Control: how will TXDOT ensure that the new, more complex configuration of traffic lights be managed to account for backups that occur throughout the day in Four Points. For example, this summer we have seen backups on RM620 heading north mid-day and early evening despite no traffic in opposing directions.

3. Satillo Del Rio at 2222: Today this signal backs up traffic on 2222 and is not coordinated with River Place Blvd signal.

Also in attendance at the meeting were members of the public and some of the District 47 candidates.