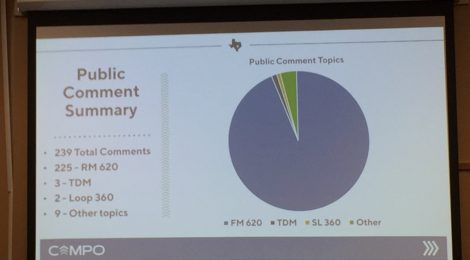 RM 620 North next steps for CAMPO, TXDOT, and Local Owners

Last night at the CAMPO policy board meeting I gave a short public comment in which I mentioned that I was encouraged by the meetings TXDOT coordinated last week (with Representative Paul Workman, Commissioner Brigid Shea, Commissioner Gerald Daugherty, Commissioner Cynthia Long, Mayor Matt Powell, Councilman Jimmy Flannigan, and others) regarding how we can move forward on RM620 north. I am writing to emphasize the public expectations for progress which I outlined briefly in my comments and to ask each of you to be an owner and champion of this corridor.

At this point, the group of local owners (Travis County, City of Austin, City of Cedar Park, Williamson County) plus TXDOT and State officials have the potential to deliver on the following expectations:

I would like to add perhaps the most important expectation of all – the one that will ultimately lead to either the success or failure of this vision: This project needs your ownership.

Until this point, politically and practically, other than work from TXDOT, the public has been the defacto owner of this big part of the RM-620 corridor problem. Ownership of this problem has not been shown by the City of Austin, Travis County, City of Cedar Park, Williamson County, nor the State of Texas as a whole. Just reference the attached letter from TXDOT in March indicating that “As for the northern segment, there have been no strong indications of support or commitments from the local entities as compared to the southern segment, therefore, there are no plans at this time to advance the northern segment beyond the feasibility study.”

Ownership of RM620 means accepting responsibility both for the problem and for the solution. Ownership entails understanding the urgency of the problem on RM620 and taking action to solve it with appropriate vigor. The back-ups on RM620 are news to no one and the fact that the “bypass project” at RM 2222 will not solve this roadway’s condition sufficiently is also not new news either.

That’s not to say that the City of Austin and Travis County and the State of Texas have done nothing for this roadway: their ultimate support for the RM2222 / RM620 improvements (so-called “bypass”) was commendable both politically and financially. Travis County and the City of Austin have also sponsored a number of point improvements over the years for safety and mobility along the corridor. Additionally, I hope that steps toward smarter signaling on RM620 and RM2222 funded in part by this CAMPO project call will bear fruit as well.

Lakeway and Bee Caves together with Commissioner Daugherty and Representative Paul Workman took ownership of the problems on the southern section of RM620 when they pro-actively partnered with TXDOT to expedite its planning and funding. That project, approved by CAMPO last evening, does more than address a hot-spot with a band aid, it is the envisioned project for the foreseeable future to address that segment of the corridor.

I respectfully request that each of you becomes an active owner, a driver, and a champion of the progress needed to implement projects that provide RM620 north with the solutions it needs for the foreseeable future. The facts on the ground speak volumes, backed up by the public outcry and the data in both CAMPO and TXDOT studies. RM620 is a growing problem today and will continue to be a problem even after the bypass project is completed in 2020. Being behind as a region is not an excuse, but a motivator on how we need to act with urgency to address the collective public misery experienced on the RM620 corridor.

With your leadership and ownership of RM620, and the vision for progress set forth last week, we look forward to seeing a solid pipeline of projects, with partner funding and support, by the next CAMPO funding call.

← Update from CAMPO Policy Board meeting – April 9, 2018
SRNA May Board Meeting – RM620 Mobility and Safety Update from Call to Action →