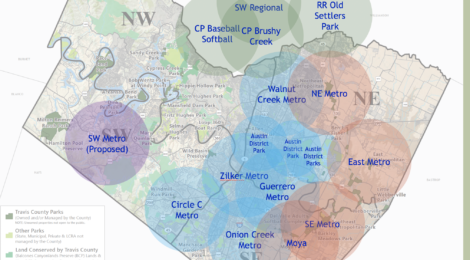 We have Travis County visiting us this week, Tuesday at Vandegrift at 6:30pm and also Thursday at Lakeway Activity Center at 6:30pm.

This is our community’s chance to provide input on Travis County’s next bond proposition this November; i.e. what your tax dollars may be spent on.

What is it?
* Travis County is planning to hold a bond election this November.
* They have formed a citizens bond advisory committee (CBAC) to help prioritize both bond and non-bond projects for the next few years as input to the final bond package which will be decided by the Commissioners Court.
* The bond package is likely to be somewhere between $50 and $150 million and will include both roads improvements and park and green space improvements.
* Projects include: parks, ball-fields or sports complexes, green spaces or land conservation; roadway capacity and safety; drainage and bridge improvements, and bicycle or bicycle safety projects.

My role and some initial thoughts for our area:
* I am on the CBAC along with 14 other Travis County residents and I have been part of the transportation sub-committee.
* Projects such as RM620 / FM2222 road improvements are not in scope – those are TxDOT projects. However, other projects that help improve traffic and safety are possible if you can help identify them.
* Presently NW Travis County lacks ball-fields and the ability to support little league, girls softball, etc.. I was surprised to find out that ball fields are plentiful or already proposed in other parts of the county. I have consistently heard requests for ball fields over the years and urge those residents that feel this is a priority to bring their requests to the CBAC public meetings. Land in NW Travis County, especially near the RM620 corridor, is disappearing due to development and soon there may be no good locations for ball-fields remaining. Specific land or general proposals to allocate money for purchase of land for this purpose may be possible.
* If you have other ideas for use of your tax dollars for specific projects, bring them!

What you can do:
* Come to the meetings and spread the word about the meetings.
* Review the projects, propose new ones, or provide input on the project priorities. Your input at the public meetings is taken very seriously by the CBAC.

How were projects identified and prioritized:
* The current project list and more information can be found here: https://www.traviscountytx.gov/cbac/project
* The CBAC broke into two subcommittees – Transportation and Parks/Green-Space and each subcommittee then performed an initial prioritization of projects.
* The subcommittees started with a Travis County staff provided list of projects accumulated over the years based on raw data, staff expertise and previous public input.
* Projects were also added as proposed by the public at CBAC meetings.
* The next step is to get input from the public. At this stage anything is possible including consideration of new projects and/or re-prioritization of existing projects.
* Project criteria: to be considered, projects must usually be something that can be reasonably executed within the coming years and generally must be in the jurisdiction of the county. For example, improvements to RM620 / FM2222 are not in scope as they are part of TxDOT jurisdiction, similarly, projects along Anderson Mill part part of COA and Cedar Park jurisdiction.

Projects in the RM-620 / Four Points area.
* Presently there is a high priority project (ranked first by staff for transportation projects) to improve Bullick Hollow at 2769 to add a right turn lane. This is to improve significant traffic backups that occur at that intersection in the afternoons.
* Westminster Glenn residents have spoken at more than one meeting and expressed interest in a sidewalk along Westminster Glen Ave where cut-through traffic happens from City Park Rd to River Place and beyond. Their requested project was added to the project list for consideration.
* One project initially planned for the bond list was the low water near crossing on Fritz Hughes Park Rd. near Montview Acres. This project was removed from the list and is not in CBAC scope for consideration since it was already funded by the Commissioners Court in 2017 as part of emergency egress improvements planned for Steiner Ranch and Montview Acres communities.

Other projects of note in Western Travis County:
* A SW sports complex has been ranked as a priority project off of 71 and Bee Creek Rd. The land is about 60 acres and although not flat is expected to hold a number of athletic fields.The project is in the $20-25 million range.