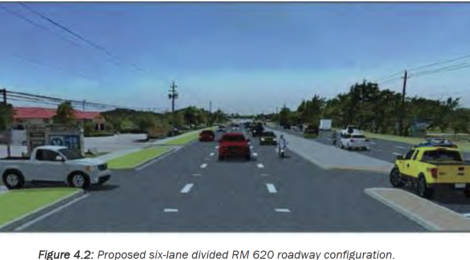 We NEED YOU to help us get the attention of officials to fund RM-620 improvements.

RM-620 will still be in a “failing state” based on TXDOT’s level of service measure even after the already funded improvements at the RM-620/RM-2222 intersection are completed in 2020. Those who travel near Anderson Mill Road and RM-620 know this very well today. The RM-620/2222 and RM-620/Anderson Mill intersections as well as RM-620/Cavalier/Aria Drive in Lakeway will continue to be at an “F” level of service in 2020 with a forecast for the corridor to get much worse in the years ahead according to the TXDOT RM-620 corridor study concluded in 2017. This study identified the next step needed to address the dire congestion and safety issues already experienced along these segments of RM-620. The proposal is to go from a 4-lane flush median highway to a 6-lane raised median divided highway:

“The main improvement — constructing a raised median along the entire length of RM 620 and widening from four lanes to six lanes from SH 71 to Lakeway Boulevard and Quinlan Park Road to US 183 — would substantially reduce delay and improve safety by reducing conflict points along the corridor” (see pg. 62 of the study). The plan also notes that “Adding sidewalks and shared-use paths along RM 620 would allow for other modes of transportation” including separation of pedestrians and bicycle riders from vehicular traffic.

The $98 million southern portion of the project (south of Mansfield Dam) has been prioritized by TXDOT and is on the CAMPO TIP funding proposal for 2022. Of the project total, they are requesting $59 million from CAMPO, $39 million coming from TXDOT funds and $5 million each from the City of Lakeway and the City of Bee Cave.

Unfortunately, the northern end of the proposed improvement from US-183 to Mansfield Dam has no local funding partner for TXDOT and is not currently on the proposed projects list for the CAMPO TIP – meaning it is no-where in sight. This northern segment is multi-jurisdictional including the City of Austin, Travis County, the City of Cedar Park, and Williamson County.  This means while there is no clear single owner, there are many parties who could chip in to partner with TXDOT and CAMPO to fund this project. Note that TXDOT prioritizes based on partner funding so the lack of any sponsoring support from the City of Austin, Travis County or Cedar Park puts this project out of contention.

“Given the strong local support from City of Bee Caves and City of Lakeway for the 6-lane divided southern section and the City of Austin’s funding commitment on the RM 2222/RM 620 intersection, TxDOT, along with CAMPO, have been able to address the funding gaps needed to advance these projects to letting.”

A brief look at the TIP project list for CAMPO has many forward looking projects totaling hundreds of millions of dollars, but doesn’t prioritize RM-620 between US-183 and Mansfield Dam despite being the number one cited roadway in the CAMPO 2015 regional study and having major traffic problems NOW:

From the CAMPO 2040 Plan, Table 6: Priority Projects Identified By Respondents to Survey:

We need your support more than ever to help get this project funded.

The clear next step for RM-620 is to request that our local governments partner with TXDOT to sponsor funding for RM-620 from US-183 to Mansfield Dam and to request that TXDOT and CAMPO take the lead in ensuring this critical multi-jurisdictional project doesn’t fall through the cracks.

None of the local governments have stepped up to own the problem or sponsor the solution – likely because they see this as “not only my problem”. But the criticality of RM-620 traffic issues and its dire forecast demand that each local government step up to do their part.

List of Local Government Contacts with jurisdiction along the north RM-620 project on the CAMPO Transportation Policy Board:

Thank you and best regards,