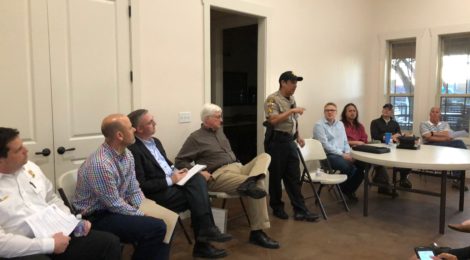 With raised awareness of RM 620 safety issues in recent weeks after multiple severe accidents, we invited a number of key policy makers on the front lines of these issues to our monthly board meeting. The focus on safety also drew a sizable group of attendees from our community – enough to pack the cozy Bella Mar community center with standing room only with about 35 in attendance. The meeting allowed for a healthy dialogue between the community, special guests and board members making for a productive meeting. Thank you to all who took the time to come out to speak and listen – your efforts are much appreciated!

SRNA has been working with officials and other groups including the HOA and other neighborhoods to advance our corridor needs for traffic, safety, and other issues, and we do need your help. We asked those at the meeting who are passionate about making a difference to consider getting involved. If you would like to get involved or you know someone who can help, please contact us: chair@steinerranchna.org. We meet every month in Steiner Ranch on the second Tuesday at 7pm, Town Square Community Center.

In the recent weeks before the meeting, SRNA had heard from TXDOT, Representative Paul Workman, and had been in contact with Commissioner Brigid Shea and the TCSO West Command office related to the recent traffic incidents and safety concerns. We would like to thank all of our officials for being responsive to our community’s concerns. We will continue to dialogue with all officials and relay community suggestions, concerns and sentiment. If you have concerns that are not captured in the meeting minutes and actions please contact us. We will need help in coming weeks for the big push that is needed to advance the longer term projects our area needs. Please mark your calendar for the next Monthly meeting, Tuesday, April 10. Commissioner Brigid Shea and others are tentatively on the agenda.

During the meeting, we had a productive discussion around the short term measures in plan for RM620 Safety and some new ideas for incremental improvements in safety. We also discussed the big fixes that SRNA has been working and announced that April will be an important month for the community to get involved due to the CAMPO planning period.

1a. Near Term safety / incremental fixes

Bruce Byron of TxDOT presented the full set of safety improvements included with the so-called “mid-term” projects identified in the TxDOT RM620 corridor plan. These improvements include a raised median to separate opposing directions of traffic from Quinlan Park Rd. to US 183 and also include an upgrade from four to six lanes of travel for improved mobility and reduced traffic back-ups. This plan is the next step for mobility and improved traffic flow after the “bypass/widening of 2222”.  See here for the study page: http://www.txdot.gov/inside-txdot/projects/studies/austin/rm620/rm-620-feasibility.html [ http://ftp.dot.state.tx.us/pub/txdot/get-involved/aus/rm-620/corridor-study.pdf ].

The Lakeway portion of the plan was submitted for including in the 2018 CAMPO TIP (Transportation Improvement Plan) for ultimately build out by 2022. The improvements north of the dam are not presently included in a funding timeline.

Brian Thompto of SRNA described the goal of getting the improvements north of the dam into the plan as a top goal for SRNA and our community and indicated it is up to us to get this project the political support needed to get on the CAMPO funding schedule. SRNA has been actively working with TxDOT to promote this project and to build project awareness for the last several years, but we will need to work as a community to secure funding and a timeline for these important improvements.  Note that in the CAMPO 2040 plan, these improvements to RM620 were the top specified priority for roads for the Austin area.
Action: SRNA will be working with our Steiner and Fours Points community, political officials, other neighborhoods, chambers, etc. to encourage :
a. engagement with public officials and CAMPO officials to promote these mid-term projects
b. participation of the CAMPO 2022 TIP survey coming up  April 2-30, 2018
c. attendance at CAMPO meeting as appropriate.
SRNA is awaiting a response from TxDOT presently on the status and outlook for the mid-term project and is expecting an update by Monday, March 26th. At that time we will roll out an outreach plan where we will need the communities help to advocate.

Note: If you want to learn more about the general SRNA traffic strategy and further background related to these plans you can read here: traffic.

Agenda Item 2: Traffic signaling improvements needed for RM620 @ 2222, 2222 @ River Place Blvd, 2222 @ Sitilo del Rio, etc.
2a. Need improvements for better traffic flow today (improve until bypass project).
2b. Need bypass project and related improvements to have sufficient technology to support efficient signaling for traffic flow (e.g. 2019 major improvements)
Action: SRNA already has started dialogue and  will setup meeting to pull togehter TxDOT and COA to review signaling both Today and for the new improvements and seek support for application of more advanced technologies to align with the opening of the new segments.

Agenda Item 3: Traffic issues inside of Steiner Ranch
SRNA has been working with the HOA and county to address traffic flow, signage and enforcement discrete actions.
Action: SRNA to setup regular dialogue with Sheriff (perhaps come to regular board meetings periodically similar to what LTFR does today) – use meetings to coordinate planning for Steiner internal learning and activity with the Sheriff.

Agenda Item 4: Update on MU-14 discussions with developer
SRNA has engaged the developer to discuss acute traffic flow concerns for the property over-all and also to discuss and work through smaller opportunities like landscaping. Additionally we have requested a “buy-out” cost.
Action: as we learn more we will keep the public and HOA informed.