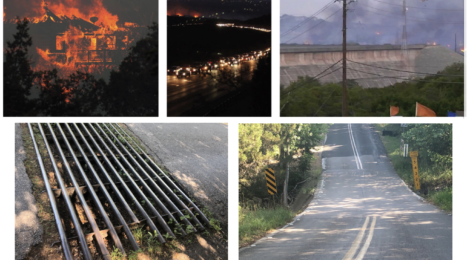 (*)
Travis County has wrapped up the design phase for the “Route B” evacuation route for the Steiner area. If you want a recap of route selection process that concluded last July, read here: http://steinerranchna.org/evacuation-improvements-approved/

The County is now conducting an open house and wants your feedback. The open house runs through May 22. Please take the time to study the plan and provide your input.

You can also reach out to our County Commissioner(s) if you have specific concerns: https://www.traviscountytx.gov/commissioners-court

The proposed construction ONLY adds a portion of the original “Route B” improvement that was recommended and approved back in 2017.

In the event Steiner Ranch needed to evacuate, the route appears to need at least some minimum improvements to be effective. Along Fritz Hughes Park Rd. there is a cattle guard at the low water crossing that is in poor shape and slows cars down to no more than 3mph (suv’s might fare better, but that doesn’t matter much when traffic will only move as fast as the slowest vehicles when during an emergency – time is of the essence).
Also, the low water crossing itself is perilously narrow and would not be safe for anything coming in (like a first responder vehicle or large equipment) while traffic is going out. None of these shortcomings are being addressed by the County’s current plan.

Collective view of the cattle guard and low water crossing

Here is the low water crossing as seen approaching along the evacuation path:

Are you comfortable with this path’s ability to save your loved ones, children, and grandchildren in the event of a catastrophic wildfire? West Austin is the #5 at-risk metro area in the nation for a massive fire…and Steiner is right in the middle of the highest risk areas.

In the event of an evacuation, traffic from Steiner would need to actually make it to RM620 along the route at a solid pace to be effective.

There is a significant and understandable sensitivity by neighbors along Fritz Hughes Park Rd. to any changes that would disturb area homes/properties, or to generally improve the nature of the roadway.

There is no need to disturb area properties or violate these wishes in order to implement a minimum set of improvements for safe passage along this route.

The obvious shortcomings in the route design are not “news”.

Previous incarnations of this ‘Route B’ plan from 2014 and 2017 all assumed improvements to this segment of the road in order to have an effective evacuation route and these shortcomings were highlighted in 2019 when it was requested by SRNA that they be investigated as part of the design process.

As far back as July 2014, when the County had already narrowed down an option most similar to what is now called “Route B” Travis County Executive for TNR said:

I agree that Fritz Hughes Park road will need to be improved if it is to function effectively and reliably as an emergency evacuation route. I will increase the budget request accordingly when the project is to be considered for funding in the future.

Here was the planning graphic from 2017:

Fast forward three years and about a million dollars of consulting, planning, neighborhood infighting, group shaming, people shaming, etc. – and we are not building half the original solution?

Please take the time to weigh in with your views on the route as currently planned. Leave a comment on the open house virtual tour:

We are also still missing clear public education on how an evacuation would take place and how to be informed in the event of an evacuation emergency.

These were cited as part of the consulting project with the County originally, and these elements should still be addressed before this project is concluded.

Author’s note: SRNA strives to provide impartial views. Evacuation in and around Steiner is a sensitive issue, and there is no easy option. We have been in discussions for over 8 years on a solution and somehow we still fall short of a viable, and efficient evacuation route in the event of catastrophic wildfire.

Hopefully we can find a way to move forward respectfully for all of our needs – including those in Montview, and along Fritz Hughes Park Rd.